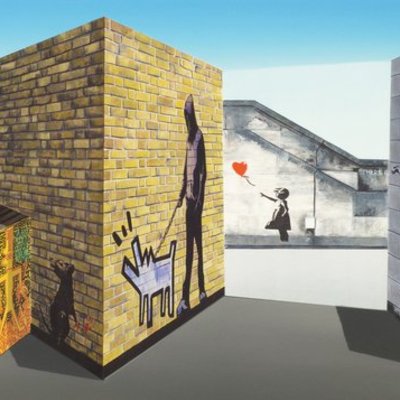 In 1961, Birmingham-born artist Patrick Hughes held his first solo show at the Portal Gallery in London. This was the first one-man show by a Pop Artist at that time. Hughes’ name became synonymous with rainbow paintings in the 1970s, popular both as postcards and prints; people appreciated them as decoration, but for Hughes the rainbow represented a solid experience. Hughes is best known however for his original painted reliefs that explore optical and visual illusions, the science of perception as well as the nature of artistic representation - his first reverspective Sticking-out Room, was made in 1964.

Hughes revisited utilising the difference between perspective and reverspective and solidifying space in the late 1980s. Since then, his 3-dimensional reverspective paintings have been in high demand; exhibited worldwide and featured in many public collections. Seeing a Patrick Hughes sculptured painting in reality allows you to experience unreality and the paradox of illusory space and movement.