I Can Resist Everything Except Temptation II

Normal is the Cruelest

Nothing So Seductive As a Dangerous Idea

Those Who Say it Cannot be Done

If It's Not Wierd

Call me Anything but Ordinary

I Can Resist Everything Except Temptation

I Tried to Drown My Sorrows

If You've Got a Skeleton 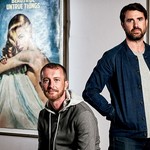 The Connor Brothers first entered the art scene as American twins brought up within an extremist Christian cult known as 'The Family.' The twins escaped to Brooklyn at the age of 16 where they began creating artworks in order to make sense of the world they had been so deprived of. In late 2014 however, these characters were revealed as fictional and art dealers Mike Snelle and James Golding revealed themselves as The Connor Brothers.

The announcement of their identity has seen a huge increase in demand with their work selling alongside the likes of Banksy, Andy Warhol, Jeff Koons and Tracey Emin at Christie’s, Bonhams and Phillips. The duo has participated in several thought-provoking and exciting projects, including Pussy Riot’s performance at Banksy’s Dismaland.